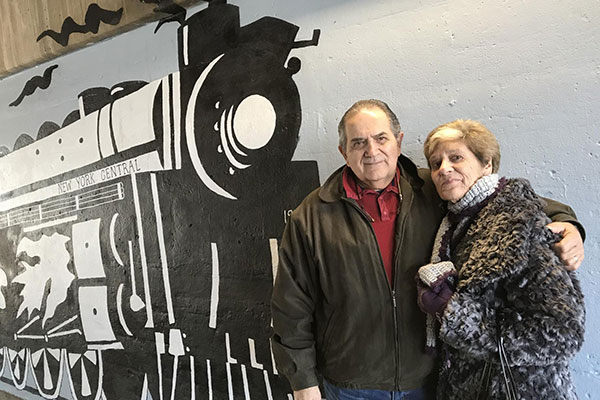 Residents got a double-jolt of activity last week with a celebration touting the partial completion of a mural commemorating the neighborhood’s working-class history.

They may not be extravagant touches, but for residents of this tiny six-street neighborhood tucked between the Stockade and Mohawk Harbor riverside development, the improvements are indicative of positive moment.

“It’s about time,” said Sadie Danahy as she surveyed the fresh asphalt. “I probably won’t be repairing my car as much.”

As part of the “Reawakening East Front Street” project, a local artist is painting a mural on a railroad bridge.

“It brightens the community,” he said. “I’m glad they’re doing it, and it’s good to see it coming to fruition.”

Dignities gathered on a crisp fall afternoon Friday to formally celebrate the new mural, but were delayed by 35 minutes as paving crews tamped down the fresh coats of pavements.

The mural joins new decorative banners, street signs and trash cans made possible by the “Thriving Neighborhoods Challenge,” a citywide initiative that allows residents to envision and execute projects to improve their neighborhoods.

The effort is funded by the city and the Schenectady Foundation, and organizers this year are again offering $250,000 for the second round of projects.