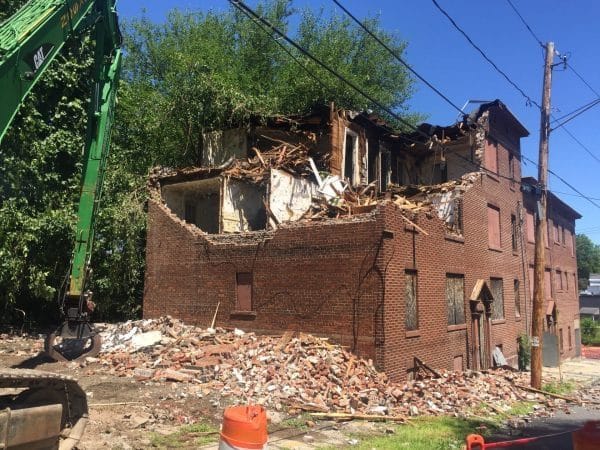 SCHENECTADY — A long-standing eyesore at a main entrance to Hamilton Hill came down Thursday, the first of 22 demolitions that will make way for a $40 million neighborhood project.

Thursday’s demolition of the derelict 11,290-square-foot brick apartment building at the corner of Paige and Albany streets will cost $177,000, the largest single piece of the $1.1 million demolition budget, according to The Community Builders.

A five-story, 58-unit apartment building with first-floor office space will be built on the site, after the rubble is removed, said Jennica Huff, senior project manager of the Boston-based nonprofit housing developer.

Phase I of The Community Builders’ Hamilton Hill project already is underway at a cost of $20 million, the major portion of which is conversion of the former St. Columba’s and Horace Mann schools on Craig Street into 54 apartments and construction of a string of single-family houses on Stanley Street.