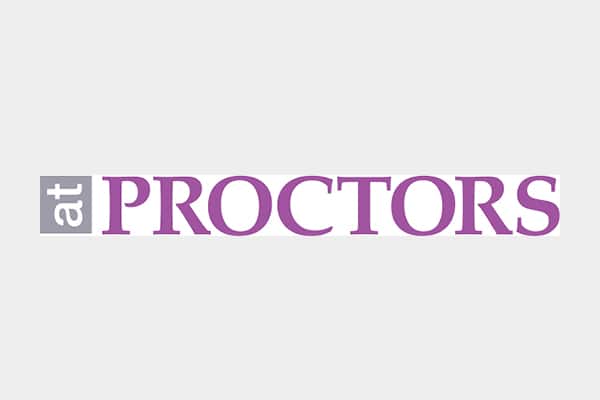 Schenectady, N.Y. — Proctors Collaborative Chief of Staff Jean Leonard joins state legislators John T. McDonald, Patricia Fahy, Angelo Santabarbara, and Phil Steck, along with Schenectady Mayor Gary McCarthy today in announcing the return of teching Broadway shows to Proctors. Three shows will assemble and rehearse at the historic Schenectady theatre, which will reopen to the public for performances in October and December.

“Thanks to the vision and support of New York State leaders, touring Broadway is coming back to launch their tours in Schenectady,” said Leonard.  “We thank our region’s representatives in advocating for the Production Tax Credit that makes this announcement possible.”

“These shows will hire local workers and put money into the local economy for 13 busy weeks,” said Assemblymember Angelo Santabarbara. “We are proud that these nationwide tours begin their life here.”

“Hadestown” and “Ain’t Too Proud: The Life and Times of The Temptations” will not offer public performances this fall but will return to Schenectady to delight audiences at a later date. The unnamed show will mark the return of live theatre to the historic venue in October, while “Summer: The Donna Summer Musical” kicks off the KeyBank Broadway Series at Proctors for a week-long run on Dec. 7.

“The Empire State Music and Theatrical Production Tax Credit will bring 300 temporary jobs and more than $8 million of direct spending to downtown Schenectady this fall,” said Assemblymember Phil Steck. “The economic impact, usually calculated at three times their direct spend, will be substantial.”

“Teching” shows assemble and rehearse on location for several weeks before starting their national tours, aided by the 25 percent Empire State Music and Theatrical Production Tax Credit. The program – providing incentives for qualified production companies to conduct technical rehearsals and other pre-tour activities – encourages the use of upstate entertainment venues, making them competitive with other venues located in Northeastern states that offer similar tax incentives to musical and theatrical productions produced on Broadway.

“This collaborative effort between upstate theatres and downstate producers has resulted in the teching of 25 tours and more than $100 million in economic activity in upstate New York,” said Assemblymember John T. McDonald.  “We are delighted to be announcing these shows at the same time as theatres in Buffalo, Rochester, Syracuse and Elmira are announcing their techs.”

Although two of the three teching shows will not host public performances at Proctors, they are an essential part of reopening. “The Production Tax Credit is also an important part of our future,” said Leonard.  “As we slowly begin to recover from the pandemic, it provides an important boost we need to reopen. And we look forward to these shows returning to us later for public performances.”

“Schenectady is a place that collaborates and innovates. This announcement shows the way for our communities to leverage the arts to restart our economies and continue to revitalize our urban centers,” said Schenectady Mayor Gary McCarthy.

Proctors is the only venue for touring Broadway shows in the Capital Region; it hosts more than 700,000 visitors across 1,700 events annually. It has remained closed to the general public since March 2020, in response to the COVID-19 crisis. “We are coming back, and we can’t wait,” concluded Leonard.

Proctors will follow the safety protocols from the Centers for Disease Control and Prevention, New York State and Schenectady County that are in place at the time of reopening and will inform patrons of those requirements prior to the performances. Health and wellness partner MVP Health Care is underwriting efforts to reopen the theater safely.