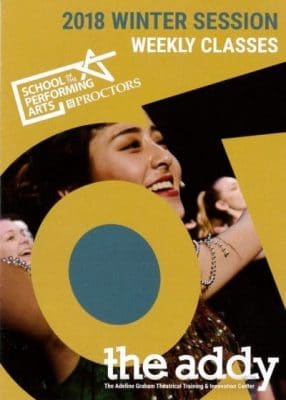 SCHENECTADY, N.Y.—NOV. 29, 2017—At a press conference today, Proctors announced the completion of the Adeline Graham Theatrical Training and Innovation Center.

Located on the third floor of the Schenectady arts complex, The Addy, as it will be commonly known, houses a 100-seat theatre, multi-use classrooms, a media lab, dance studio, rehearsal room/flex space and a variety of amenities, which will serve over 500 students and 10,000 patrons annually.

“There is nothing for us as exciting as opening The Addy,” said Proctors CEO Philip Morris. “This is as laser focused as our mission gets, bringing together education, entertainment and economic development in one wow package. We are beyond proud.”

Spurred by a legacy grant from Graham—a longtime Schenectady resident and former director of Proctors, whose philanthropy continues to support education, arts and the community—The Addy is already in use by the Empire State Youth Orchestra’s CHIME program, which currently serves 60 young musicians from local elementary and middle schools.

Beginning in January with nearly a dozen instructors working every day, The School of the Performing Arts at Proctors will host more than 200 students in weekly classes including the middle school-based Acting Academy and the high school-oriented TheatreTECH.

Over 20 new programs are planned, with many open to the public, and employing another brace of 10 adjunct instructors, all marking a robust expansion of the department’s already impressive slate, which will only grow with summer offerings.

In collaboration with Workforce Development Institute, TheatreTECH at The Addy will provide hands-on experience for participants, with apprenticeship programs connecting emerging professionals with training and certification to work in a variety of performing arts careers.

The performance space, largely staffed, from a technical perspective, by these students, will add another distinct venue to Proctors—serving as art house cinema, concert hall and theatrical stage.

Students will have their own break room in the rehearsal space. A concessions stand will cater to film and theatre patrons (with full bar for appropriate events).

“We congratulate Proctors on the creation of The Addy and completing the transformation of the former Carl Company building into a thriving art and community space,” said Anthony Jasenski, chairman of the Schenectady County Legislature. “The arts have played such an important role in our economic development efforts and rejuvenating our downtown, improving the quality of life for all of our County residents.”

Ray Gillen, chair of Metroplex said, “This new venue completes the renovation of the cherished Carl Company, one of the last undeveloped spaces on State Street. The third floor now features performing and exhibit space including a versatile 100-seat theatre that will draw more people to downtown Schenectady.”