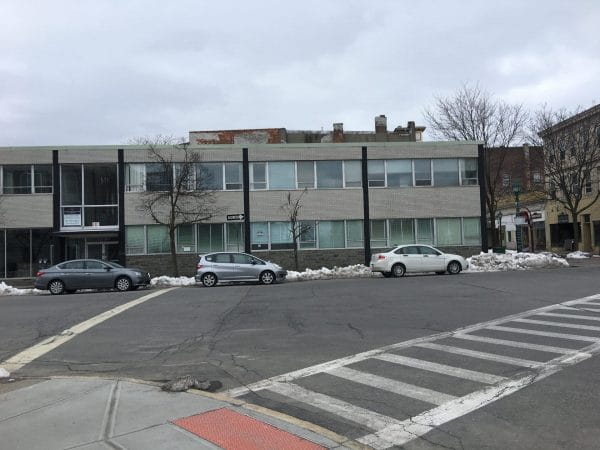 SCHENECTADY, N.Y. – The two-story office building at 430 Franklin St. has no flourishes. It is a squat, utilitarian rectangle, easy to overlook next to the classical City Hall across the street, the lions emerging from the roof line of the Seneca building on Jay Street and the spires and yellow brick of the Seed of Abraham synagogue next door.

Built to last from poured concrete in 1956 as offices for IBM and Met Life, the 8,500-square-foot building took the place of a far bigger, more elegant structure erected in 1830: The Van Curler Opera House, an extremely fancy place with a turret on one corner that resembled a minaret, an abundance of decorative brickwork and a grand, two-story entrance. The opera house seated 800 and was called “one of the largest and best appointed theatre stages in the country,” according to an illustrated edition of the Schenectady Gazette from 1898. Stars like Al Jolson, Eddie Cantor and George Jessel played there; so did the Ziegfeld Follies.

One of the current owners of 430 Franklin St., Brooke Spraragen, turned historic photos of Jay Street into a long banner on both the Franklin and Jay street sides of the building, showing the evolution of the site and a street bustling with people and commerce. The words “The New Electric City,” spelled out with images of electric bulbs, overlay the pictures. One photo shows the sign for Schenectady Hardware and Electric, founded by the siblings’ great-grandfather, Benjamin Spraragen, in 1923.

The opera house evolved into a movie theater and then hosted numerous businesses: City Hall Kosher Deli, Kelly’s Liquor Store, Maccabee’s Hall, the Communist Political Association, an insurance agency, the Italian Political Association, a beauty salon, dress shop, a musicians’ union. The auditorium was demolished in 1943, and in 1956, the rest was knocked down. In 1956, an entirely different building took its place to create offices for IBM. By the early 1960s, IBM was gone, and Travelers Insurance moved in, followed by a string of small businesses, including law offices, a laundry and a barber. Most recently, Capital Dist Psychiatric Center and the Renaissance art gallery were located in the building.

Brooke and her brother, Chris, both in their 30s, grew up in Niskayuna and remember downtown Schenectady as a place you didn’t want to hang out, where once-vibrant storefronts became long-term vacancies. But the Spraragens describe themselves as longtime Schenectady boosters. They’re thrilled to see the investment at Mohawk Harbor and the various projects supported by the Metroplex, a public economic development authority that grants financial assistance to worthy projects.