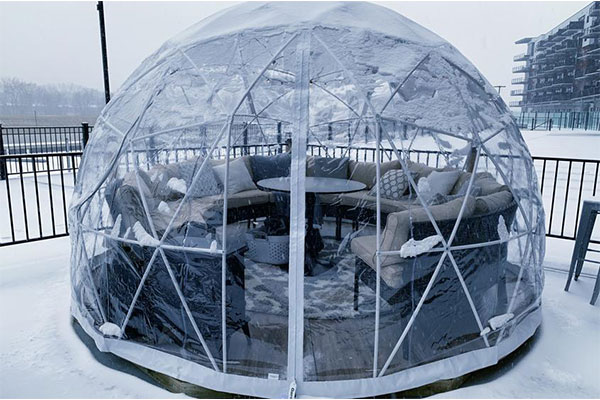 BY INDIANA NASH, The Daily Gazette

Schenectady, N.Y. — Ice bars are out and igloos are in. At least that’s the case at The Shaker & Vine.

Earlier this week, the self-serve wine bar installed an igloo on its patio, which looks out onto Mohawk Harbor. The clear-plastic domed feature has attracted quite a bit of attention already, as owner Anthony Graziano hoped it would.

“I travel around the country a lot and I’ve seen [some] great experiences out there and I thought it was something fun and unique to bring over here to the Capital Region,” Graziano said.

Featuring couches and tables, the first igloo to be installed fits parties of six to eight people. By mid-next week, a few others will dot the 2,500-square-foot patio.

“We have two that are going to be for larger groups and they’re more like a lounge-style inside but the third igloo we’re going to put together is more of a communal igloo for couples. There’ll be just two top tables in there for smaller parties,” Graziano said.

Each igloo includes a Bluetooth speaker, which guests can use to play their own music. Blankets are also included, a feature some might find necessary.