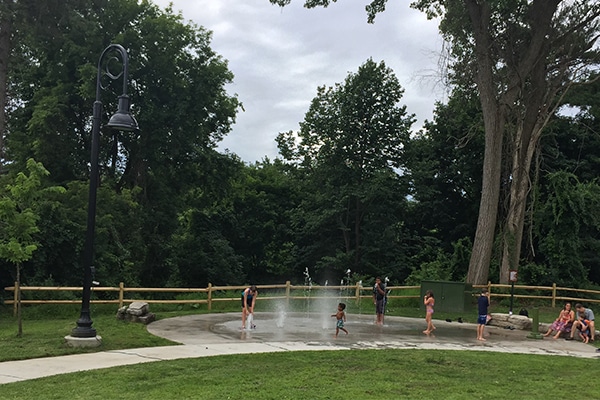 Schenectady, N.Y.  – The Board of Directors of the Capital Region Land Bank has approved a Memorandum of Understanding with The Schenectady Foundation to construct a new splash pad at Wallingford Park in the City’s Mont Pleasant neighborhood as part of the Thriving Neighborhoods Challenge program.

The Schenectady Foundation will provide $100,000 to fund the project which will be implemented by the Land Bank working closely with the City of Schenectady.  The Land Bank built a splash pad at Tribute Park in the Eastern Avenue neighborhood in 2018.  The Foundation and City jointly funded a splash pad at Woodlawn Park in 2019 developed by the Woodlawn Neighborhood Association.

Richard Ruzzo, Chairman of the Land Bank and a Schenectady County Legislator said, “The Mont Pleasant Neighborhood Association identified the splash pad as a priority and we are pleased to move this project forward.  This is exactly the type of neighborhood building project that the Land Bank likes to be involved with.  The new splash pads at Tribute Park and Woodlawn Park have been a major hit and we look forward to Mont Pleasant joining in the fun.”

Mayor Gary McCarthy said, “As we work every day to beat the COVID crisis, we are committed to moving ahead with capital projects like this new splash pad as part of our efforts to build back better.  We thank The Schenectady Foundation and the Land Bank for working with the City team to make this possible.”

Robert Carreau, Executive Director of the Schenectady Foundation said, “This is a project Mont Pleasant needs and wants. We are thrilled to help make the splash pad possible, and thankful to have such a strong, competent partner as the Land Bank taking the lead role to get it done.”

The Land Bank will oversee construction and installation of the splash pad.  The project will be designed by Parkitects and utilize equipment and systems from Aquatix by Landscape Structures, the same two companies that designed and installed the splash pad at Tribute Park.

The Land Bank, Schenectady County and the City of Schenectady have partnered on multiple development projects in Mont Pleasant including the construction of a new branch library, a new Boys and Girls Club, façade improvements, demolition of more than 50 derelict properties and planned improvements to Orchard Park.  The Schenectady Foundation also played a role in many of these projects.

The Capital Region Land Bank is administered by the Schenectady County Metroplex Development Authority as part of the County’s unified economic development team.