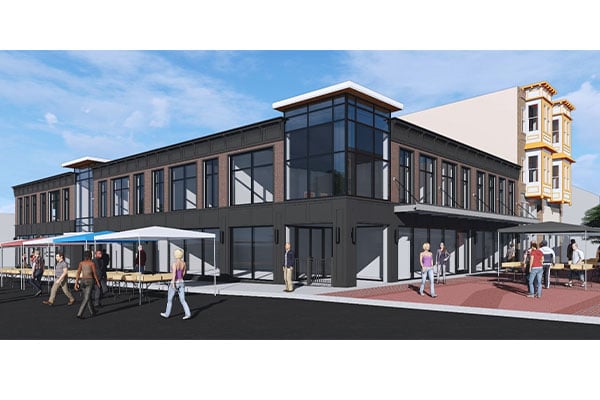 Schenectady, N.Y. — The Schenectady County Metroplex Development Authority today announced that the one of largest vacant buildings in downtown Schenectady yet to be renovated will undergo a total makeover now that new local owners have replaced an absentee landlord.

The building at 430 Franklin Street has been purchased by the Spraragen family.  It was formerly owned by a private investor who lived out of state.

The new owners will call the renovated building “The Benjamin” to honor their great-grandfather Benjamin Spraragen who attended Union College and then relocated to Schenectady after graduation, founding Schenectady Hardware and Electric in 1923. The company is still family-owned and is one of the largest electrical contractors in the Capital Region.

“Benjamin was dedicated to his family, his business, and his community.  He would be proud to see how Schenectady has continued to prosper. In his honor, we plan on reinvesting in our hometown by making this major commitment to renovating 430 Franklin Street,” said siblings Brooke and Chris Spraragen.

“We thank Chris and Brooke Spraragen for their commitment to our community,” said Anthony Jasenski, Chair of the Schenectady County Legislature.  “The Benjamin will be a great addition to the Jay Street Marketplace and downtown’s continued transformation.”

“We are very excited to announce this latest development in the revitalization of downtown Schenectady,” Mayor McCarthy said. “We greatly appreciate the Spraragens’ investment in our community.”

“This vacant building was detracting from our downtown development efforts and we are pleased to move forward with this major upgrade,” said Ray Gillen, Metroplex Chair.

430 Franklin Street is located at the corner where the Jay Street Marketplace connects to City Hall.  The Whistling Kettle recently completed a major renovation to 138 Jay Street nearby.

The two story building has more than 17,000 square feet of space with on street parking and a satellite parking lot on Clinton Street that will be renovated as part of the project. The lot under previous ownership was often in poor condition.

All new energy efficient heating, air conditioning and lighting systems will be installed along with a new elevator, façade, roof and mechanical systems.

“National Grid is proud to support the energy conscious redevelopment of 430 Franklin and continued revitalization of Downtown Schenectady with its economic development programs,” said Laurie Poltynski, Regional Executive, National Grid.  “This project will bring vibrancy to a vacant space and continues the successful momentum of investment in downtown.”

More information is available at www.430franklin.com or on Instagram @TheBenjaminatFranklin