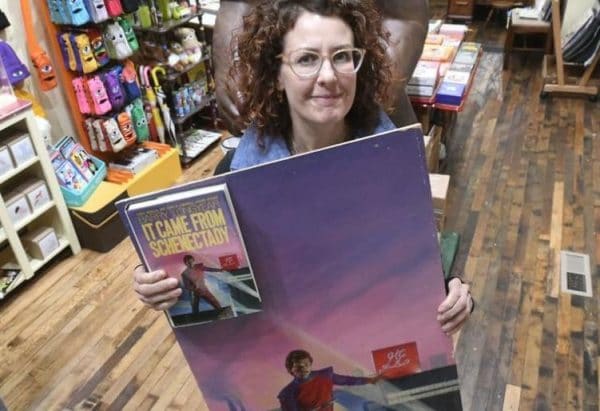 BY INDIANA NASH, The Daily Gazette

SCHENECTADY — Lower State Street is changing. With the construction of the Mill Artisan District Project, as well as the recent opening of boutique/gallery Bear and Bird, the street has been a flurry of activity in the last few months.

Amanda Magnetta-Ottati and her husband Tate Ottati recently moved to Schenectady in the hopes of becoming part of the action.

“We felt like this was a good spot for us because . . . there’s potential for growth,” said Magnetta-Ottati, who owns Bear and Bird.

The store is an eclectic mix of art supplies and books, quirky kitchen accessories and gifts of all kinds. Prints and illustrations adorn the walls, including both modern works and vintage illustrations.

The couple opened the shop in November, after moving to Schenectady from South Florida, where they still own and operate Tate’s Comics, Toys and More.

Tate opened the store back in 1993. Magnetta-Ottati, who has a background in graphic design, brought a gallery element to the business in 2007, calling it Bear and Bird. She worked with local and national artists on rotating shows and commissioned artists to do specific pieces, focusing on illustrative works and pop art.

A few years ago, both Tate and Magnetta-Ottati felt overwhelmed by how crowded South Florida was becoming. Since Tate has Schenectady roots—his father was a turbine engineer at General Electric and his mother’s family owned Garofalo’s Meat Market for more than 100 years—they checked out the Electric City.

“One thing we really liked about the Capital Region was it had a sense of community that was missing in Florida. . . There’s not a lot in terms of support for the arts there. Here, I feel like there’s so much support [for] the arts, it kinda takes me aback a little bit,” Magnetta-Ottati said.

They moved to Schenectady with their two children in 2018 and after renovating the space at 107 State Street, they opened the business late last year.

The building was first constructed in 1900, and while the bricks on the wall are original, Magnetta-Ottati used salvaged wood from a Stockade home to replace the floor. All the furniture has been collected from local estate sales and restored, including the checkout counter, which was once a watchmaker’s desk.