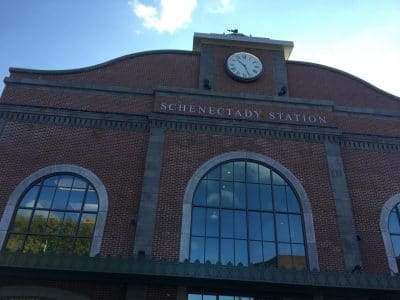 In early colonial days, the area that became Schenectady – noted for pine flats in a bend of the Mohawk River – was considered the formal “door” to the territory of the Mohawk peoples.

The new Schenectady train station opened in October 2018, creating a fitting gateway to the “Electric City” for those arriving by rail. The $23 million complex is within a short distance of attractions including the Rivers Casino, historic Proctors Theatre, Schenectady County Community College, restaurants and shops. In addition to Amtrak service, numerous Capital District Transportation Authority bus routes pass within walking distance of the station.

Inspired by the design of the city’s old Union Station, which opened in 1908, but was torn down in 1971, the new building is constructed of red brick. Dark grey stone is used as trim at the base, cornice, parapets and in stylized pilasters at the corners of the main walls. The principal façade along Erie Boulevard is divided into three parts, with a projecting center section that highlights the entryway and tiered clock tower. The latter is capped by a glimmering gold colored dome with a whimsical weathervane in the shape of New York State. The clock tower is visually connected to the rest of the building through a pair of swooping parapets that create a sense of drama. A green metal canopy wraps around the building, protecting customers from inclement weather.

Inside, visitors enter a double height room with a soaring ceiling; natural light floods in from the tall, round arch windows. Gray marble is used as a wainscot in the waiting room, and its prominent veining catches the eye, providing interest and depth. The grey terrazzo floor, speckled with flakes of black and white stone, is elegant yet durable – and suitable for a busy public area. In its center is an inlay in the shape of New York State that is etched with the state’s major cities and passenger rail routes.

In addition to comfortable seating and a ticket office, the waiting room includes displays whose artifacts trace the history of the region’s peoples and its railroads. On the walls above, large digital screens depict elements of the city’s history and highlight local attractions. There is also a Passenger Information Display System (PIDS) that depicts train arrivals and departures and other passenger information on both digital monitors and over a public address system.

Across from the main entry is the concourse leading to the new concrete platform with tactile edging that is located on a viaduct above street level; it is accessible via an elevator or stairs. The overall station project also included improvements for those arriving by car, bike and on foot, such as a reconstructed parking lot and new sidewalks and lighting.

Schenectady, New York State, Amtrak and the Schenectady Metroplex Development Authority (SMDA) collaborated over many years to see the station project to fruition. The station revitalization plan had been in the works in various forms since at least 1999, when it was described in the Downtown Schenectady Master Plan.

The station project was funded through $19 million from New York State: $17 million for construction and the remainder for engineering services and other costs. The Federal Railroad Administration provided $3.6 million toward the building, Amtrak contributed $220,000 for the PIDS and the SMDA set aside $48,000 for the improved parking lot.

The new facility is the latest in a line of railroad stations that have served the people of Schenectady. One of the grandest was the 1908 Union Station, a neoclassical structure built by the New York Central and Hudson River Railroad to replace a temporary building from 1885. Constructed of stone and brick, Union Station featured elegant round pediments at each end of the building. At the turn of the 20th century, the tracks throughout the city were being raised to eliminate grade crossings at street level. This project, combined with the new Union Station and its elevated platform, was much anticipated and enjoyed a week-long celebration in February 1908.

Passenger rail service to Schenectady ended in 1969, prior to the creation of Amtrak. Penn Central, which then owned Union Station, sold the facility to the city in December 1970 for $20,000. It was demolished the next year to make way for a downtown parking lot. Following the start of Amtrak service to Schenectady in 1978, work was begun on a new station that opened in 1979. It was built to a standard Amtrak design that incorporated textured concrete masonry units on the exterior, floor-to-ceiling and clerestory windows, and a black cantilevered roof. Restoration of rail service and construction of this passenger facility were funded jointly by the state, Amtrak and the city.

The area of what would become Schenectady, pine flats in a bend of the Mohawk River, was considered the formal “door” to the territory of the Mohawk peoples that first lived there. The location was important to them as the river was navigable by canoe from there to Rome, with an easy portage around obstacles. When the Dutch moved to the Albany area in 1614, building Fort Orange, the river-bend area was referred to as S’guan-hac-tac-tic, “without the door,” which may have in turn been altered to become pronounceable for the Europeans. Fur trade between the Dutch and the American Indians flourished, and Schenectady grew into a stockaded village—which was burned at the beginning of the French and Indian conflicts in 1690. However, it was soon rebuilt, and some of Schenectady’s oldest houses date from 1700 and still stand in the Stockade District.

Schenectady was first incorporated into a borough in 1765, and chartered as a city in 1798. Opening in 1825, the Erie Canal—now Erie Boulevard, on which the station stands—ran through Schenectady, and was the longest artificial waterway in the world. At 360 miles, the canal created a navigable water route from the Atlantic Ocean to the Great Lakes. Twenty-two locks were needed to pass the falls of the Mohawk River and drop 208 feet from Schenectady to Albany on the Hudson. This day-long process encouraged the growth of the railroad here, as it presented a more efficient means of making that traverse. The Mohawk and Hudson Railroad, the first in the state of New York, made its first run between Albany and Schenectady in 1831, having been chartered in 1826. It was succeeded by the Delaware and Hudson Railway by 1871 (now Canadian Pacific Railway).

In coordination with General Electric, they began producing diesel-electric locomotives. They even experimented with automobiles for a time, giving a start in the business to Walter P. Chrysler. Alco was the builder of some of the biggest locomotives ever to operate on America’s rails, including Union Pacific’s “Big Boy.” By 1955 the company renamed itself Alco Products, as locomotives were no longer its only product. The Schenectady works, the “hauls” part of “the city that lights and hauls the world,” however, closed forever in 1969.

In 1886, the Edison Machine Works moved to some former railroad shops in Schenectady’s South End: it would become Edison General Electric in 1889, shortened to General Electric in 1892. This storied industrial giant, one of the 12 original companies listed on the Dow Jones Industrial Average, has innovated in the areas of lighting, television, radio, computing, space systems, computers, electronics and electrical devices, financial services and more. GE continued building locomotives after splitting with Alco, including units powering Amtrak trains. While GE’s headquarters is no longer in Schenectady, its administrative core remains in the city.

On February 20, 1922 at 7:47 p.m., WGY, the oldest radio station in New York State’s capital region, signed on the air for the first time. The early broadcasts originated from building 36 at the General Electric Plant in Schenectady, the G in WGY. The station still broadcasts as a talk radio station.

Schenectady is also home to Union College, founded in 1795, the first college to be chartered by the Board of Regents in New York. This independent liberal arts college has produced notable alumni, such as U.S. President Chester Alan Arthur and Gordon Gould, the inventor of the laser.

Schenectady continues to celebrate its history of innovation and its connection to the railroad every year, and welcomes the Canadian Pacific Railway Holiday Train each Christmas season. Citizens turn out to greet the train and the holiday season, and the arrival of the train often coincides with day long activities.