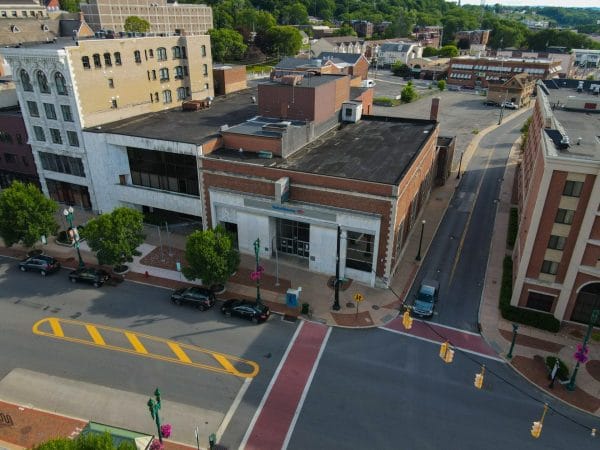 Now the developers have their eye on the Bank of America building located at the corner of State and Clinton streets.

Redburn put in for $2.75 million in Schenectady Downtown Revitalization Initiative (DRI) funds for an ambitious series of projects that would transform the Clinton Street corridor.

“If that goes though, we will purchase the building,” said Redburn principal Jeff Buell.

The sale currently is pending.

Purchase of the sprawling three-story structure with multiple marble storefronts would sew up the 500 block of State Street for the developers, whose headquarters are located in the recently renovated Foster Building located on the block.

Located across State Street is the site of the developer’s proposed 49-unit apartment building, which will occupy the site of the former Citizens Bank building that was torn down earlier this summer.

The developers are currently negotiating with prospective tenants to fill the 60,000-square-foot Bank of America building, whose lone remaining tenant is Bank of America after Eddy SeniorCare moved its day program for senior citizens to Rotterdam.

“We’ll be gutting the entire building and starting from scratch,” Buell said. “It’s a significant project.”

The bank branch occupies just 6,000 square feet of space in the building.

Redburn often uses historic tax credits to renovate historic structures, and the Bank of America project will use that same approach, Gillen said on Thursday.

The building dates back to 1834, when it was established as the Schenectady Savings Bank.

The purchase is just one component of Redburn’s broader $38.7 million effort to redevelop three blocks of Clinton Street, a pathway both Redburn and local officials acknowledge is underdeveloped.

Buell hopes to create an economic corridor from the I-890 ramps, up Clinton Street and into downtown.

Other DRI projects — including a city-sponsored project to reopen a closed strip of North Jay Street to Erie Boulevard — would then carry that momentum through Little Italy and ultimately, Mohawk Harbor.

“We look at the Clinton Street corridor as a vitally important connector,” Buell said.
To read the complete article on the Daily Gazette’s website, click here.
PHOTO: Mitch Ramsey