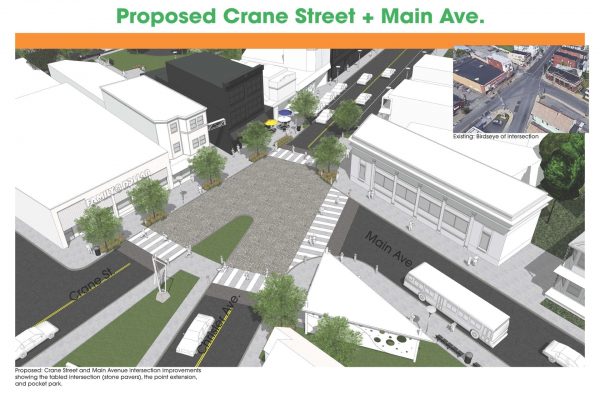 “This high-traffic intersection is in the heart of the Mont Pleasant neighborhood, and these upgrades reflect a community-led transformation that builds upon the momentum of positive change we’re seeing within the community,” Mayor McCarthy said. “From the new library to the new Boys & Girls Club, to the new Orchard Park, and revitalization efforts along Crane Street, we’re just so excited to see such progress in the neighborhood.”

“This investment represents not only an improvement for the Schenectady community, but a solid investment in our future,” Assemblyman Angelo Santabarbara said, who grew up in the Mont Pleasant neighborhood. “The Crane-Main intersection currently suffers from a host of problems, including poor pedestrian conditions, high traffic volumes and the awkward convergence of four roads at odd angles. I helped secure this funding to not only make it safer to motorists and pedestrians but also to help ensure the success and longevity of this important corridor.”

“When we built the new Mont Pleasant library, it was the Legislature’s hope that it would spur additional investment within the neighborhood,” said Schenectady County Legislator Richard Patierne. “The Craig-Main Connection project, including the upgrades to the Crane-Main-Chrisler intersection, continues the transformation of Mont Pleasant into a community its residents will be proud to call home.”

The extended sidewalk connecting point between Chrisler Avenue and Crane Street will prevent cars from making U-turns between Chrisler and Crane. The plan also proposes to table the intersection with raised material encouraging drivers to reduce speeds and increase alertness.

This intersection is the site of the Schenectady County Public Library’s new Mont Pleasant Branch. The intersection upgrades will also complement several other recent and ongoing community development initiatives in the Mont Pleasant neighborhood, including the new Schenectady Boys & Girls Club, the redevelopment of Orchard Park, and façade improvements and other revitalization efforts along Crane Street’s business corridor.

The Crane-Main intersection upgrade was one of the primary recommendations included in the Craig-Main Connection Final Report – a community-led complete streets initiative to transform the Craig Street and Main Avenue corridor into a safe, inviting, and inspiring connection between residents and community points of interest. In 2019, the City of Schenectady and the Capital District Transportation Committee (CDTC) hosted a series of workshops, curbside conversations, surveys, and community engagement events to provide practical, resident-led design decisions.

Earlier this month, Mayor McCarthy joined Congressman Paul Tonko (D-Amsterdam) to announce funding for another community recommendation from the Craig-Main Connection initiative – the $4.3 million Craig Street complete streets project – which is included in the INVEST in America Act, a major national infrastructure bill approved by the U.S. House of Representatives and awaiting review by the U.S. Senate.

In total, the upgrades to the Crane-Main intersection are estimated to be $750,000, with the City covering the remainder with Community Development Block Grant (CDBG) funds. Construction work is expected to begin in 2022. To learn more about this initiative, visit the project website at www.craig-main-connection.com.