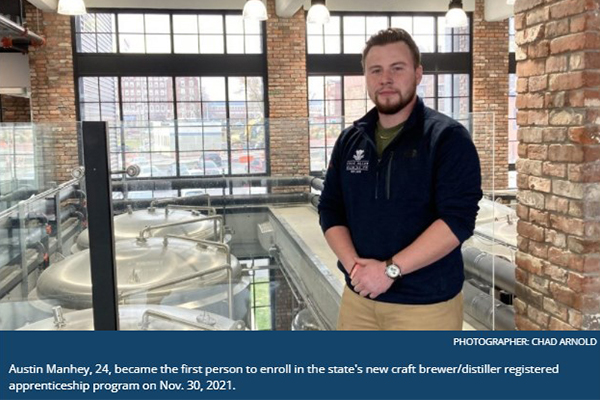 BY CHAD ARNOLD, The Daily Gazette

SCHENECTADY, N.Y. — Austin Manhey has always been interested in craft brewing, but never imagined he would become a brewer.

But when Manhey, 24, graduated with a criminal justice degree at the onset of the pandemic, he faced difficulty finding a job and eventually began working at Frog Alley Brewing, where he has slowly been learning a number of jobs over the last two years, including a bit about the brewing process.

He immediately took a liking to it, which is why when he was approached about enrolling in a new apprenticeship program Frog Alley recently formed with SUNY Schenectady and the state’s Department of Labor that would allow him to gain hands-on experience in becoming a brewer while earning college credit, Manhey jumped at the opportunity.