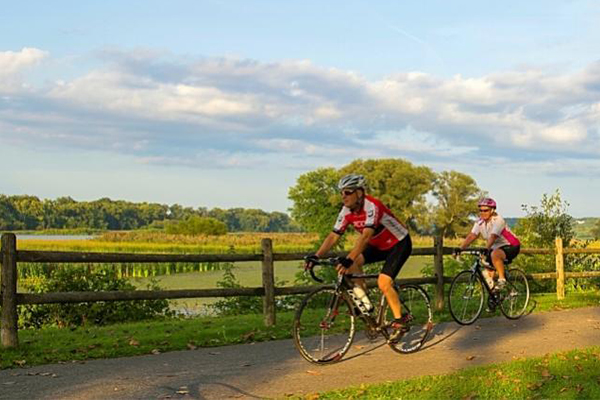 Schenectady, N.Y. — Now that a twenty-one-mile stretch of the Empire State Trail through Schenectady County is complete, the County is seeking public input on a new trail wayfinding study that was released today.

“We are excited that the trail is now complete from Niskayuna to Rotterdam Junction,” said Anthony Jasenski, Chair of the Schenectady County Legislature. “The Empire State Trail is a great recreational asset for our County. Completing the trail has been a top priority for the County Legislature and now that it is finished, we want to make sure that new signage enhances the trail experience for residents and visitors alike.”

The State recently completed an $8 million project in Rotterdam Junction that corrected several major gaps in the trail improving safety and accessibility. The County had to agree to maintain improvements to the trail as a condition for receiving the $8 million in improvements. The upgrades in Rotterdam Junction include two new trail tunnels that dramatically increase the safety of the trail by eliminating the need to cross rail tracks and ride along busy roadways.

With construction complete, the County worked with Metroplex to commission the new wayfinding study. Metroplex contracted with Kris Fitzgerald and Sarah Bilofsky of 2k Design, based in Clifton Park, to develop the plan. The company brings extensive experience developing signage, maps and websites for trails and communities across the state. View the plan.

The County’s draft plan offers recommendations for new signage including:
• Trail etiquette signs to improve safety;
• Interpretive signs to showcase the County’s rich history and landmarks; and
• Directional signs to point trail users to nearby dining, shopping and accommodations.

Ray Gillen, Metroplex Chair said, “This wayfinding plan builds on the County’s earlier work to build the Alco Heritage Trail along the riverfront with interpretive signs and plans to construct an Empire State Trail Gateway using funding awarded via the Downtown Revitalization Initiative (DRI). We are hoping to get feedback from the many trail walkers, runners and riders in our community.”

Todd Garafano, Executive Director of Discover Schenectady said, “Surveys show that about four million people visit the Empire Trail each year. Schenectady County has some of the most beautiful and historic sections of the entire statewide trail. This new wayfinding plan will help us direct trail users to the many attractions that are located along the trail or close by.”

Once the wayfinding plan is finalized both digital and pocket maps of the Schenectady portion of the Empire State Trail will be produced.

Anyone interested in providing comments on the plan or suggestions about bike and hike trails in Schenectady County are invited to send them to info@schenectadymetropex.org. Comments are requested by December 31, 2021.